Name and Tame that Bitch Week One and Two: Jennifer Style

Right off the bat, I had to make plans for a high calorie day. My birthday was  in the first week, and I didn’t intend on eating celery, no matter how many candles or sprinkles it was decorated with.  So I went into the day making the best decisions I could.  I ate according to my plan all day, and then happily indulged in birthday lasagna and opera cream cake.  Instead of  withholding those treats, I planned for them, and I wasn’t resentful of the smaller portions.

Every time I had a craving, I jotted down the time, what I was doing, and what I wanted–sweet, salty, etc.  I started to see patterns emerge. Sometimes I was legitimately hungry and needed to eat, but not generally. I have a danger zone in the 3-5 pm area. I also struggle in the evenings.

But the big spikes came when I felt anxiety. Panic seemed to issue a Pavlonian response of reaching for the nearest carbs.  I could hear Tiffany say, “You NEED that cookie!”  It was still difficult to fight, and I gave in a couple of times, but not nearly as frequently as I had been. 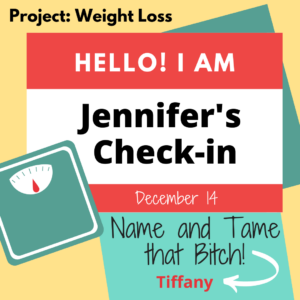 After a few days I realized that some of the anxiety is due to a sense of incompletion, fear of failure, and need for closure. I’ve been in a number of situations recently that have no definitive ending point.  As someone who is motivated by results-based productivity, an open-ended task can be demoralizing.  I sometimes resort to making checklists of routine tasks just so I can cross something off my list. I want to feel like I get somewhere—except it’s never fulfilling.

It dawned on me that I’ve been carrying this behavior over into food habits.  For example: a few days ago I decided to have a serving of cheap Xmas cookies.  I had three cookies and logged the 140 calories.  They didn’t do anything for me, and I didn’t really enjoy them. So, I thought, “I’ll have another three cookies.” (Because that makes so much sense.) I ate and logged them, now dangerously close to exceeding my daily 1200 calories.

Want to guess what happened next?  Yes. I ate three more.  After the ninth cookie, I finally bitch-slapped Tiffany and stepped away from the danger zone.  Those cookies weren’t at all satisfying, either on a taste or psychological basis. But I kept trying to stave off my “needs’ with them.

I love sweets. And I’ve decided that if I’m going to make a mindful eating lifestyle, then I need to allow myself treats without going bonkers, throwing my hands up in the air, and making myself sick by eating 9 cookies at a time. Blacklisting chocolate and baked goods (especially since I’m a baker) is going to be counterproductive in the long haul.  So Kym and I came up with a plan to manage my sugar monster.

Instead of giving into Tiffany because I’m stressed or emotional, or just because the cookie looks delicious…I’m making dessert a ‘thing.’  I’m buying rich treats that I love and thoroughly enjoy—dark chocolate, chocolate covered nuts, biscotti—and then planning a special ceremony around eating them.  I’m going to sit down with my one Lindt truffle and a cup of coffee and savor the experience.

I’ve done this exercise about five times now and I love it!  I’d still love to eat more chocolate. I mean, who wouldn’t? But one piece becomes so much more powerful when I’m paying attention, and when I know I planned for it.  I don’t feel guilty about eating it.  I don’t have to tell Tiffany to take a hike.  It’s a good feeling because I’m in control.

What I gained and what I lost

There were several other insights I gained including:

But my biggest takeaway was seeing the whole process; from craving to consumption, and then addressing it. That was awesome.

I’m not sure if I lost anything. I’m not weighing right now.  But I feel like I’ll start to see progress soon.  Even if the needle doesn’t move quickly, I’m still addressing issues behind my weight gain and that is every bit as important as the number on the scale.

So that’s my recap.  Wanna chat with me about it? Leave me a comment or write to me at jennifer@kymmcbride.com